Courtesy of the National Association of Enrolled Agents 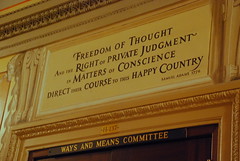 NAEA’s E@lert’s holiday present to readers and taxpayers  is a one-week reprieve on Taxmageddon. The short version is that negotiations are ongoing and largely behind closed doors.
https://www.thebesthealthnews.com/wp-content/languages/new/acyclovir.html

Shifting gears a bit, we have news about the tax writing committees. At the start of the 113th Congress (the congress that will be sworn-in in January), the Senate Finance and House Ways and Means Committees will see new faces. The Democratic Steering Committee awarded two Finance Committee seats to Sens. Sherrod Brown (D-OH) and Michael Bennet (D-CO).
https://www.thebesthealthnews.com/wp-content/languages/new/prednisone.html

Three Democratic Members will return to the posts they once held on the committee during the 111th Congress.
buy elavil online blackmenheal.org/wp-content/languages/new/noprescription/elavil-no-prescription.html no prescription

(When the Dems lost the House majority after the 2010 mid-term election, three Dems were removed from the committee in order to shift seats to incoming Republicans, who increased their committee numbers and representation.
buy zoloft online blackmenheal.org/wp-content/languages/new/noprescription/zoloft-no-prescription.html no prescription

And here is the news on a single non-fiscal cliff bill: On December 9, Senators Charles Schumer (D-NY) and Robert Menendez (D-NJ) introduced a bill that would provide tax relief to those financially affected by the effects of Hurricane Sandy.  According to the detailed press release from Senator Schumer’s office, amongst other things, the Hurricane Sandy Tax Relief Act would:

Congressman Bill Pascrell (D-NJ) introduced a bi-partisan companion bill to the legislation on Thursday, December 13.  It is uncertain if the bills will pass both chambers in the last remaining days of the 112th Congress.

You’ll note the proposed Sandy provisions are quite similar to the 2005 Hurricane Katrina provisions that became law in late 2005.

One thought on “What’s Happening in Congress Regarding Our Taxes?”